Definition: Flood Insurance is a type of Property Insurance that usually covers Home/Dwelling for the different types of losses which will be sustained by water damage and specifically due to flooding caused by heavy rain, melting of snow, storms surges in a coastal region or levee dam failure.

Flood Insurance coverages are different from the basic hazard coverages contained in the homeowners policy. For example, the Homeowner policy covers interior wall damage which may happen due to unconditional weather events like tornadoes and rainstorms. But this policy doesn’t cover the destruction caused by flood waters. So for natural disasters, people need to get special coverage like flood insurance, etc. 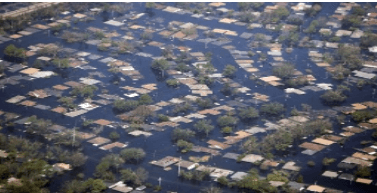 Like the other insurances, these insurance policies work in the same manner. For the insurance policy, people have to pay an annual premium based on the property’s flood risk and deductible.
More than 60 Insurance companies are providing this Insurance in the USA. NFIP itself also provides this insurance to many families.

NFIP: Here NFIP stands for National Flood Insurance Program and this program is specially managed by the Federal emergency management agency(FEMA). This usually offers the flood insurance policy to home insurance policy in some communities along with some floodplains. 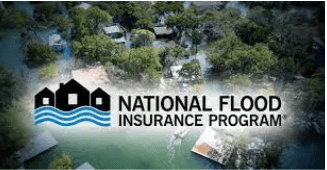 Many States of the USA lie under major risk factors and a list of Major risk states is attached below:

According to the NFIP, there are some major examples of flooding are listed below:

Overflow: During tropical storms and hurricanes, the overflow of inland and tidal water can be caused by storm surges.

Runoff: When an area with an improper drainage system receives very heavy rainfall in a short period of time.

Mudflow: When heavy and sustained rainfall accumulates on the ground and forms a river of mud down a hillside and later this leads to flooding.

What is Covered in Flood Insurance?

General Guidance on the item covered by flood Insurance is listed below: 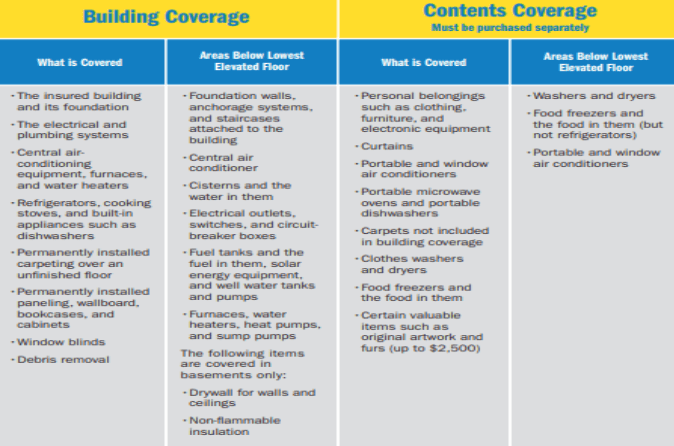 For more details of coverages: https://www.youtube.com/watch?v=DFh9mEsmHrE

What is not covered in Flood Insurance?

Explanation: The list of exclusions are discussed below in the chart: 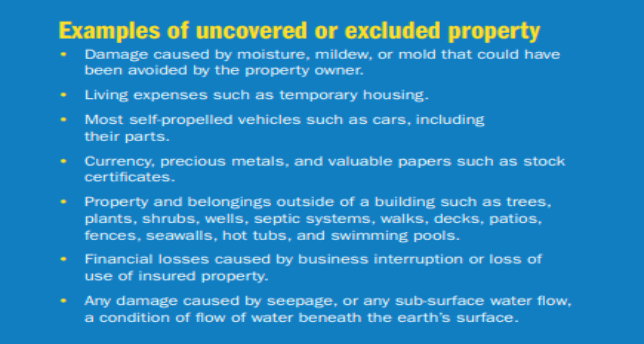